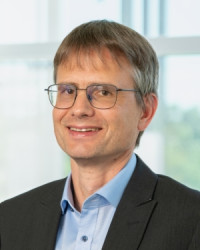 Meinard Müller received the Diploma degree (1997) in mathematics and the Ph.D. degree (2001) in computer science from the University of Bonn, Germany. After his postdoctoral studies (2001-2003) in Japan and his habilitation (2003-2007) in multimedia retrieval in Bonn, he worked as a senior researcher at Saarland University and the Max-Planck Institut für Informatik (2007-2012). Since 2012, he has held a professorship for Semantic Audio Signal Processing at the International Audio Laboratories Erlangen, a joint institute of the Friedrich-Alexander-Universität Erlangen-Nürnberg (FAU) and the Fraunhofer Institute for Integrated Circuits IIS. His recent research interests include music processing, music information retrieval, audio signal processing, and motion processing. He was a member of the IEEE Audio and Acoustic Signal Processing Technical Committee (2010 to 2015), a member of the Senior Editorial Board of the IEEE Signal Processing Magazine (2018 to 2022), and a member of the Board of Directors of the International Society for Music Information Retrieval (2009 to 2021, being its president in 2020/2021). Currently, he is a member of the Editorial Board of the Transactions of the International Society for Music Information Retrieval (since 2017). In 2020, he was elevated to ACM Senior Member and to IEEE Fellow for contributions to music signal processing.

Besides his scientific research, Meinard Müller has been very active in teaching music and audio processing. He gave numerous tutorials at major conferences, including ICASSP (2009, 2011, 2019) and ISMIR (2007, 2010, 2011, 2014, 2017, 2019). Furthermore, he wrote a monograph titled Information Retrieval for Music and Motion (Springer-Verlag, 2007) as well as a textbook titled Fundamentals of Music Processing (Springer-Verlag, 2015. Recently, he released a comprehensive collection of educational Python notebooks, referred to as FMP Notebooks, designed for teaching and learning audio signal processing using music as an instructive application domain.

While Meinard Müller's scientific background lies in computer science, mathematics, and engineering, he has a long-term experience in conducting interdisciplinary research in close collaboration with historical musicologists (e.g., within the projects Computer-Assisted Analysis of Harmonic Structures for Wagner's Ring and Freischütz Digital – Paradigmatic Implementation of an Authentic Digital Edition Concept) and ethnomusicologists (e.g., within the project Computational Analysis of Traditional Georgian Vocal Music). In the last ten years, Meinard Müller has been the principal investigator of more than ten research projects funded by the German Research Foundation (DFG). These projects were funded for three years, with at least one full staff member in each project. Besides managing the projects, one specific focus of Meinard Müller is the support and training of young scientists. As a result, all staff members working on his projects could complete a doctorate with a topic closely related to the project work. In this way, Meinard Müller has successfully led 15 students to a Ph.D. degree within a doctoral period of four years (parallel to the project work).