Published in the Proc. of the International Conference on Acoustics, Speech and Signal Processing, 2014.

When capturing speech in a multi-talker telecommunication scenario, it is desirable to keep the enhanced signal at an equal loudness level for each speaker. Single-channel automatic gain control systems are not able to adjust the level of different talkers when they are active simultaneously. We incorporate spatial information into an automatic spatial gain control algorithm by controlling the directional response of an existing informed spatial filter, which reduces diffuse sound and noise. The spatial filter is designed with highly time-varying directional constraints that are adapted, such that the direct sound of multiple sources can be kept at a constant desired loudness level at the output. The proposed algorithm is able to adapt during double talk scenarios. It is shown that the proposed algorithm works well within the tested scenario.

There are three different speakers at different positions of a uniform circular array with 12 microphones speaking with unequal loudness. Two speakers are always active simultaneously. The Automatic Spatial Gain Control (ASGC) algorithm adjusts the loudness of all speakers and reduces reverberation and noise. Details of the scenario and setup are described in the paper. 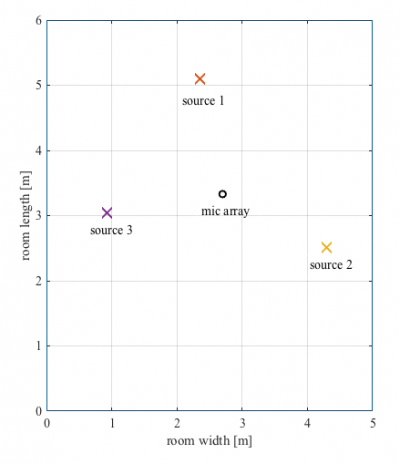 You can listen to the mixture and the single signals before and after applying the proposed filter. In the processed signals, all speakers are adjusted to the same loudness.